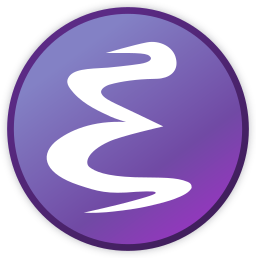 Emacs can be a very powerful tool to help you write VHDL code. It has:

This article shows you how to set up Emacs for VHDL work and make it behave like a regular Windows text editor (for copy/paste).

Emacs looks pretty much the same if you’re using it in a terminal or if you’ve launched the GUI version. The GUI can have an icon-bar if you like. When I launch it and switch it to VHDL mode, it can look like this:

Emacs can be used with the default menu bar and icon bar, but you really get the most out of it if you know some basic keyboard short-cuts. The Gnu organisation has a PDF reference card, here, but it’s easy to get swamped in the details and (a bit further on) I’ll be showing you how to customise it to make standard copy/paste keys work, so I’ll run through the most essential ones and you can look at the reference card if you want more.

Cancel out of the minibar: <Ctrl>-]
It’s like an escape key. If you think you’ve lost control or are in some strange mode, hold down a <Ctrl> key and mash ] a couple of times.

Emacs refers to opened files as “buffers”. Emacs can have lots of buffers open at once, but it doesn’t have a tabbed bar at the top to show them all. If you have at least one document open, then press <Ctrl>-left mouse click to get a menu showing a list of them.

That’s enough for now; they really are the basics. We’re going to be customising more in the section below, then I’ll introduce a few fancy ones at the end.

When Emacs starts, it looks for an environment variable called “HOME“, then it looks for a file called “$HOME/.emacs” to load your options. Now, there’s a ton of options and you really don’t want to make all your options in that one file; I find Emacs is much more manageable if you break the options out into separate sections and load them from there.

If you’ve never launched Emacs before, you won’t have a “.emacs” file saved yet. The “.emacs” file contains any changes to the standard Emacs settings that you make and save.

By default, Emacs uses a very old way to copy and paste text. Our first configuration change will be to configure standard Windows/Mac Cut/Copy/Paste keys. This is called cua-mode. Launch Emacs, go to the menu bar and select “Options -> Use CUA Keys”.

You have to save the option or it won’t be remembered next time you launch Emacs. Go to the menu bar and select “Options -> Save Options”.

If you’ve got the HOME directory open in Explorer, you will notice a new directory is also created, called “.emacs.d”. We can ignore that; it’s not relevant, but if you really want more details, look here.

You can edit the “.emacs” file manually, if you like. Here’s what the start of mine looks like:

If it’s set up correctly, you can check with these 2 commands.
vsim -version
make -v

I was going to explain each step in my Emacs configuration, but that’s really slow and boring. Instead, you can grab an archive of my set-up below, install it by extracting it into your $HOME directory with this command:

Once installed, you can enter VHDL mode by pressing <Ctrl>-F12. Next, I’ll explain some key points so you can customise it for yourself.

Here’s a function-key strip that you can print out as a reference:

Customise It For You

Open my sample .emacs file and scroll to line 422. Everything before this line gets overwritten by these statements:

Open emacs/site-vhdl-templates.el and change this line to whatever you want to be called:

The funky SpeedBar isn’t going to work for you unless you point it to where your code is. Open emacs/site-vhdl-projects.el and edit the paths. By default, I store my work under C:/Work, but you’ve probably got yours somewhere else. The general format of each project is a sequence of “space”-separated parameters:

If that’s a it confusing, use the Emacs editor’s menu system and look at:
VHDL -> Project -> Options -> Project Setup

If you have Vivado or ISE installed, try changing my install paths to yours. Once you do that, you will be able to open the Speedbar with <Shift>-F12 and scan those files.

In the next article, I’ll show you how Emacs speeds up your VHDL coding and keeps your files looking clean.